Do I need to make my pots, pans, and cookware available?

Do I need to make my pots, pans, and cookware available?

Yes. Your Genie will use your pots and pans, as needed, to make the meals. They will clean everything they use when they finish preparing the meal.

CookinGenie: A Better Way for Chefs to Manage Their Own Business

If you’re a talented chef, you probably know the rewarding feeling of cooking for friends and family and being met with rave reviews. They might ask you when your restaurant is opening, half-seriously urge you to start a catering business, and proudly proclaim that they would pay good money to eat your food. But even as a chef, the idea of opening a restaurant or catering company is daunting. It certainly is fulfilling to share your cooking with people, but you may not want the risk or commitment of trying to launch your own business.

What if there was an easier way, a way to earn money cooking the food you love, but in a casual setting, without the all-consuming obligation of running your own business? Well, for professional chefs and skilled home cooks alike, CookinGenie is just that.

(Also Read – What is CookinGenie)

With CookinGenie, chefs have a platform to essentially manage their own business but in a flexible manner. CookinGenie allows chefs (genies) to create their own menus, set their own prices, and make their own schedules to fit around their busy lives. They can do all this while building their personal brand and establishing a base of regular clients. At CookinGenie, the genies have total creative control of the food. They can change menu items seasonally and can source ingredients from the local stores they love. To fulfill an order, they arrive at the client’s home, cook a meal, clean up, and earn money sharing their talents with satisfied customers.

This setup is dramatically different from most traditional chef jobs. Typically, the life of a restaurant chef entails working long hours in a hot, sweaty commercial kitchen, all while under the pressure of trying to satisfy a packed dining room. It’s hectic, stressful, exhausting, and often doesn’t pay well. Plus, most chefs in a restaurant are preparing someone else’s menu, either the head chef’s or the owner’s, so it’s hard to let creativity and passion flourish. Although the hours may be a little more normal, working in a catering company offers many of the same challenges.

CookinGenie, on the other hand, provides all the joy and excitement of cooking for others without the serious drawbacks of other chef jobs. The genie decides what’s on the menu and when they want to be available to cook. All of the cooking is done in a relaxed setting in the client’s home; there’s no pressure to keep up with the pace of service. The genie gets the personal satisfaction of interacting directly with the people enjoying the fruits of their hard work, instead of the food being sent out into the void of a dining room. CookinGenie chefs are compensated competitively and even have the opportunity to collect tips from happy customers.

All told, CookinGenie is a fantastic way to make money and manage your own business as a chef. The flexibility allows chefs to continue other pursuits while also earning extra income as a genie and building a following. From a work perspective, there is simply no beating the creative liberties and stress-free atmosphere CookinGenie provides. In the crazy world of cooking, CookinGenie proves that there really is a better way to be a chef.

If you’re a talented local chef or home cook and CookinGenie sounds great to you, then we’d love to hear from you! Send us an email at: careers@cookingenie.com

Trusting strangers to deliver your food 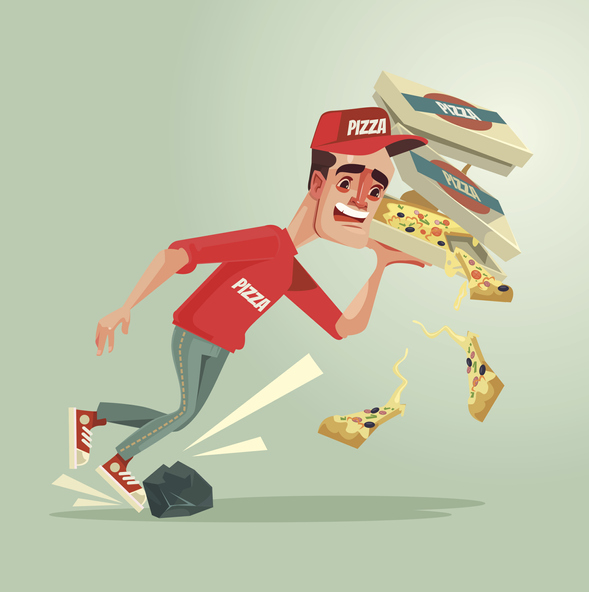 A recent article released by NPR revealed a startling statistic. It published the results from a Survey by US Foods. That survey interviewed 500 food delivery drivers and 1500 food delivery customers. The results were disappointing to say the least. First revealing that 54% of those drivers found themselves tempted by the smell of a customer’s food. Additionally, nearly half of that 54% admitted to sampling the very food they were tasked with delivering. Not only is this a huge breach of trust, but it also raises issue of sanitization. The hands touching your food have been exchanging money with other patrons, getting in and out of their car, possibly even smoking. Those are the hands now rifling through the French fries you bought and paid for.

Even more unfortunately, this is a best-case scenario. We won’t even reference the many articles of vindictive drivers who tampered with food in retaliation of poor tips. You will not have to search hard to find plenty of stories of body parts and bodily fluids mixed together and even live streamed on Facebook before the food was delivered. Hardly appetizing you say? We agree.

Last year TheTakeout.com ran an article about a loophole in the Uber Eats Delivery Service policy. Basically, it stated that if the driver makes an attempt to contact the person who ordered the food but isn’t able to reach them, they can keep the food. According to a few posts from people claiming to be Uber drivers this was an easy way to score a free meal.

Uber is stuck between a rock and a hard place on this one. Obvious acts of fraud or theft will result in termination from the company. But in the technical age of dropped calls and dead cell phone batteries it’s not hard to imagine a real failure to connect. As much as we’d all like to believe the best about everyone, the evidence clearly points to the faults of this system.

Food Inc.: Corporations Cooking for Us

A few years ago, an infographic went viral that showed how most of the world’s food brands are owned by just a handful of corporations.

Around the same time that this infographic started circulating, a study found that nearly 60% of the calories in the modern American diet come from processed foods.

How did we get here with our food?

In the early years of our country, home cooked meals & fresh cooked meals were the ways to eat. We plucked our own chickens, grew our own vegetables, made our own bread. We ate whole foods made from scratch. There were innovations—a company called Van Camp sold canned beans to the Union Army during the Civil War, Clarence Birdseye introduced frozen foods in the 1920s—but for the most part, we knew where your food came from or at least knew the local farmer or butcher who provided our ingredients.

It was post World War II that our food supply really started to change. Food manufacturers who had secured government contracts during the war saw their profits plummet. To make up for lost wartime revenue, they started introducing new food innovations designed to appeal to housewives’ demand for convenience, like Minute Maid concentrated orange juice, Duncan Hines cake mixes, and Minute Rice.1

(Also Read – Made to Cook: The Cooking Hypothesis)

The way Americans shopped for food was changing, too. Turn-of-the-century housewives bought their food from the freestanding grocer, butcher, and dry goods stores. They’d hand their shopping list to the store clerk, and the clerk would pick all the items for them. The first self-service grocery store, Piggly Wiggly, opened in Memphis in 1916, and this new store model—where consumers roamed through the store picking out their own items from the shelf—quickly caught on. According to the National Women’s History Museum, between 1948 and 1958, the number of supermarkets in the United States doubled to over 2,500 and for the first time, it was cheaper to buy processed food than fresh.

Suddenly there were lots of money to be made in packaged convenience foods and the mergers and acquisitions began. Large companies started gobbling up smaller brands, and the steady consolidation of the industry continues to grow. In the last 20 years, there have been 9,007 mergers and acquisitions in the food, beverage, and grocery space, according to The Food Institute.

Industry watchdog Food & Water Watch says that all this consolidation means that these companies have an outsized influence on the food choices, diets, and working conditions of people around the world — not to mention the impact they have on the environment. Reduced competition gives these corporations control of the market price that farmers get for their crops and livestock. It’s led to the decrease of family farms and the growth of factory farms, ecologically damaging farming practices, and more and more unhealthy processed foods on grocery store shelves.

Amidst all this, what can we do to eat healthy? We love eating out and that will always remain an enjoyable experience. But the sure shot way to eat healthily is to have more home cooked meals. Meal prepping can also be an effective strategy. But if modern life gets in the way of fresh cooked meals or meal prepping, consider businesses like CookinGenie. CookinGenie can send a Genie (culinary experts ranging from classically trained chefs to specialized home cooks) to your house to make home-cooked meals for you and your family. Click here to view our menus and book your Genie today & enjoy fresh cooking from wholesome ingredients.